When I was in school, I had a lot of friends who said they sucked at math. They used to say it over and over again. And, as a result, they performed poorly in maths exams. I’m sure you have had such friends too. Maybe you were “that friend”.

People who believe that only a few gifted ones have certain qualities, skills, and talent, are the ones with a fixed mindset. They think that intelligent people are born that way and that they cannot do anything to be like them. My friends, who thought that they sucked at math and that only a few talented students can perform well in math, are the ones with a fixed mindset.

Conversely, people who believe that all qualities and skills can be learned with hard work, practice, and effort, are the ones with a growth mindset. These people love challenges. They believe that learning and practice are essential to achieve success.

The people with the fixed mindset do not just believe that skills and qualities are unchangeable, but they also have the urgency to prove themselves over and over. This is because they think that they have to show their personality and character as they only have a certain amount of intelligence.

In her book, Carol talks about an experiment she conducted: She gave four-year-old children to solve a jigsaw puzzle. Once the puzzle was completed, the children were asked whether they would redo the same puzzle or try a harder one. The children with a fixed mindset wanted to redo the puzzle because they felt safe with it now that it had been solved. The growth-minded children, on the other hand, were excited to try the harder one.

Children with the fixed mindset want to make sure they succeed. Smart people should always succeed. But for children with the growth mindset, success is about stretching themselves. It’s about becoming smarter.

Fixed-mindset people believe that smart people don’t make mistakes. So, once they are proved as smart, it is a matter of their ego. They avoid challenges. For them, it is a matter of proving it to others that they are smart rather than learning and making an effort.

Fixed-minded people avoid criticism and do not try to learn from feedbacks. They are also threatened by the success of other people. As a result, they are unable to unlock their full potential.

For the growth-minded people, it is always about learning and making an effort. They do not try to prove anything to others. Failure, for them, is a way to learn and do better.

If a student fails his math exam, here are the two scenarios that can occur depending on his mindset.

Fixed mindset: I suck at math. It is really difficult. I can never be good at math.

Growth-minded people love to take on a challenge. They do not give up easily and they understand the fact that by making an effort and working hard, anything can be learned. These people learn from criticism and feedback, and they are inspired by the success of others.

Here is a figure from the book, that summarizes the idea of the two mindsets. 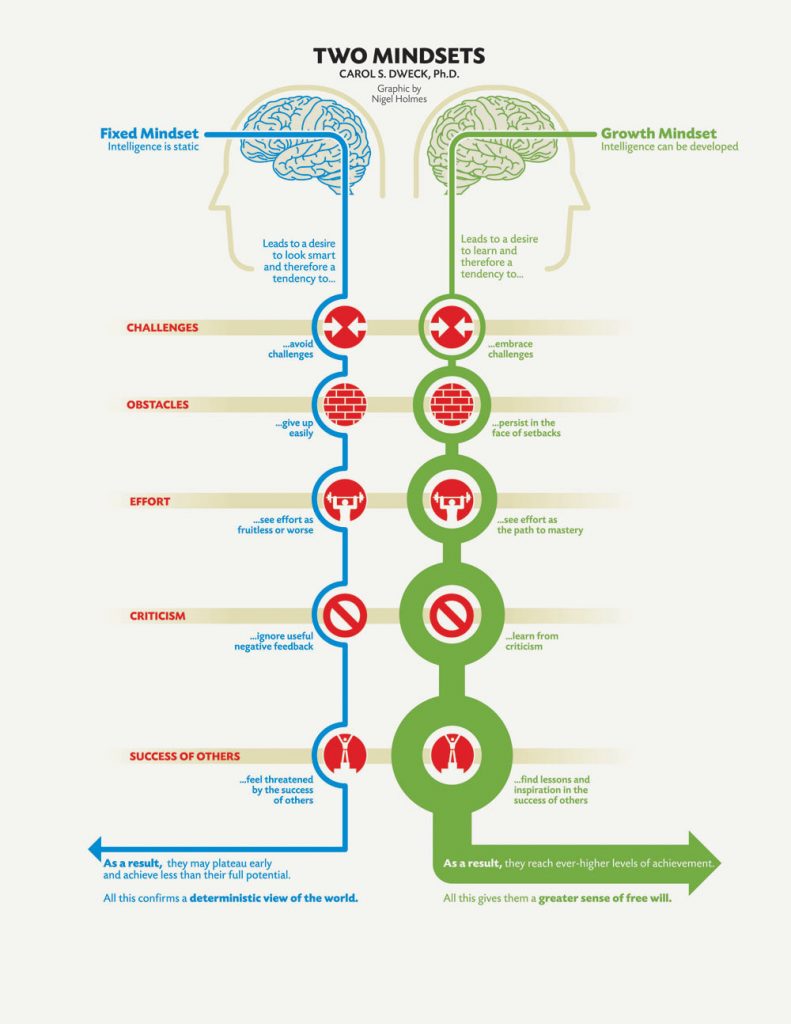 Lessons from the Book

The book talks a lot about children and their mindsets. Children often learn by observing and through actions. Parents and teachers often believe that children who perform well academically are the smart ones and those who fail or do not perform well are not smart. This is the thinking of fixed-minded parents/teachers.

Once a child is made to believe that he or she is not smart enough, a fixed mindset is developed. This often happens unknowingly. For instance, praise is one of the biggest reasons that creates a fixed mindset in children.

Example 1: You did really well in the test. You are so smart.

Example 2: You did really well in the test. You must have worked very hard.

The difference between the two examples is that in the first example, the kid is praised for his intelligence. In the second example, the kid is praised for his effort. One thing the author frequently repeats in the book is that praising children’s intelligence harms their motivation and it harms their performance. We must praise them for their effort. The first example will create a fixed-minded child whereas, the second example creates a growth-minded child.

If parents want to give their children a gift, the best thing they can do is to teach their children to love challenges, be intriged by mistakes, enjoy effort, and keep on learning.

Mindset plays an important role in sports, especially for athletes and coaches. Most people believe that in sports, talent is all that matters. They think that only talented players and coaches succeed and the rest can not outperform them. But, it is not quite so.

Mindset matters in sports more than anything – the mindset that you can improve your skills and become a champion by practicing and believing in yourself.

The author gives an example of Michael Jordan. He was not a natural talent. But he was one of the hardest-working athletes in the history of sports. It took him hours to perfect his shots. One of his former coaches says that he was a genius who constantly wanted to upgrade his genius.

People with the growth mindset in sports took charge of the processes that bring success and that maintained it.

In businesses, usually, when the leaders have a fixed-mindset, the company is unlikely to grow. It is very important that the bosses have a proper mindset so that they can teach and inspire the employees by developing a growth mindset in them.

If the bosses are controlling and abusive, everyone is likely to obtain a fixed mindset. Such bosses are only willing to run the company in their terms. Instead of learning, growing, and moving the company forward, everyone will be worried about being judged inside the company.

A growth mindset helps create great companies. A leader with a growth mindset can encourage his followers to improve their skills and learning abilities. Such leaders would have the capability of bringing out the best in others. They would also take feedback as a way to learn from.

For the growth-minded people, broken relationships will be about understanding, forgiving, and moving on. Again, it is about learning from it.

Usually, relationships are mostly about trust, communication, and understanding. The author says that proper communication can improve any relationship. However, fixed-minded people usually have these false beliefs about their relationships. For instance, if they have to work at a relationship, it wasn’t meant to be. They believe that problems indicate character flaws.

Fixed-minded people think that the ideal is instant, perfect, and perpetual compatibility.

Growth-minded people know that you, your partner, and the relationship are all capable of growing and changing.

But, here’s an important point to consider:

How to Fulfill Your Potential?

By now, it must have been pretty clear that in order to fulfill your potential, all you have to do is develop a growth mindset.

When I read this book for the first time, I was amazed by how a simple shift in your mindset can have so much impact in different areas of your life. However, I found myself to be a growth-minded person ever since I was little. I always knew I had the potential to do better. Sometimes, I wanted to prove myself to others too. But, learning was always the first priority for me.

Challenges are a part of growth. You must learn to embrace challenges. Do not try to avoid difficult situations.

Do not give up easily. Persistence is very important for success. Keep working on what you want to achieve in spite of the obstacles or setbacks. The effort you make is more important than winning or losing.

Did I win? Did I lose? Those are the wrong questions. The correct question is: Did I make my best effort?

Anyone can develop a growth mindset. All you have to do is change the way to think. 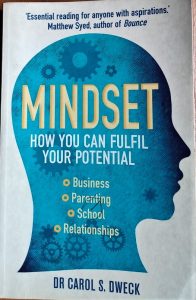 Mindset is a book that is definitely worth checking out. This book will change the way to think. It will help you unlock your potential. If you are a parent or a teacher, this book can help you and your children understand the working of the mindset so that you can help them lead a better life.

I highly recommend reading this book. 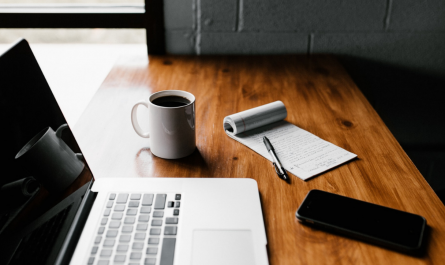 #1 Hack to Improve Your Memory and Boost Your Productivity 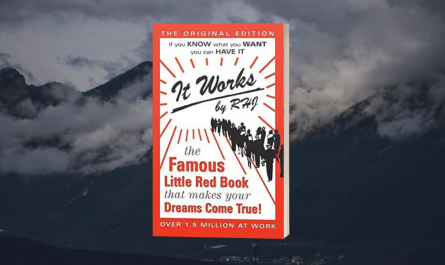 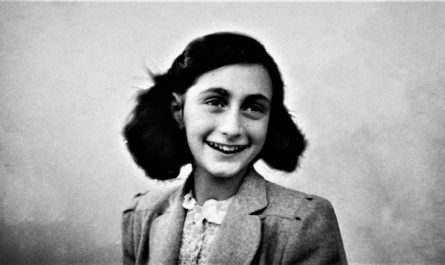 This Anne Frank Quote Will Teach You A Valuable Life-Lesson